The occurrence of sexually transmitted infections has been confirmed in a number of domestic animal species, and in some wild species in captivity. However, experimental proof has been lacking in wild animals in nature. Researchers from the Veterinary Medicine University Vienna and France have now succeeded in demonstrating this for the first time in a wild species, the black-legged kittiwake, a seabird, by blocking insemination experimentally using a simple ring fitted around the cloaca. Females infected with the newly discovered sexually transmitted pathogen suffered lower hatching success and invested more effort in reproduction to compensate for the loss. 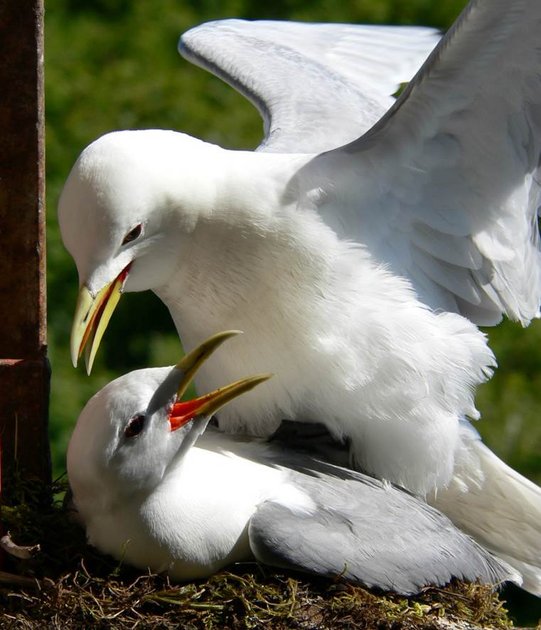 Sexually transmitted infections in vertebrates may lead to infertility or reduced breeding success and thus to a reduction or loss of Darwinian fitness. It is therefore surprising that the sexual transmission of pathogens and their evolutionary-ecological consequences have not been researched experimentally in wild vertebrate animal populations.

Researchers from the Veterinary University Vienna, in a study published in the current issue of The Biological Journal of the Linnean Society, have now for the first time manipulated sperm transfer to confirm the sexual transmission of a pathogen in a wild population of animals, the black-legged kittiwake, a seabird, and have identified associated reproductive consequences. Using a simple experimental setup and DNA sequencing analysis, they demonstrated that a pathogenic bacterial strain was transmitted through the ejaculate during copulation, resulting in reduced hatching success that was compensated for by increased female effort, possibly at the long-term cost of reduced survival.

The research team led by Richard H. Wagner from the Konrad Lorenz Institute of Ethology with colleagues from the University of Toulouse, France, captured 70 randomly selected kittiwake pairs from a wild colony in Alaska. Bacterial samples were then taken from the birds’ posterior orifice, known as the cloaca. The cloacas of 33 captured males were then fitted with a special ring to prevent insemination. The remaining males were fitted with a control device that permitted insemination. The cloacal bacteria were resampled after the first egg was laid, after which the rings were removed.

“For the males in the experimental group, the simple plastic ring, which we had developed in a previous study, works much like a male chastity belt by blocking inseminations. Certain explanations can be ruled out by comparing the cloacal bacteria samples taken before and after the ring’s application between the experimental and the control group,” says Richard Wagner, explaining the experimental approach. “Pathogenic bacterial strains that are found after mating in both sexes in the control group but only among males in the experimental group are an indication of sexual transmission. For example, if a male has strains X, Y and Z and his mate has Z only, we would find that after we blocked insemination, the female would lose strain Z. This means that the female had acquired strain Z from the male through copulation and was able to rid herself given a lack of further inseminations. Such a result cannot be explained by females receiving their mate’s internal bacteria via courtship feeding, or by both mates obtaining the shared strain from their nest.”

A sequence analysis of a specific region of the ribosomal RNA of the sexually transmitted bacteria demonstrated a relationship to two strains of Corynebacterium, a pathogen that is also known as the causative agent of sexually transmitted diseases in humans. The blocked insemination prevented transmission of this pathogen, designated as “C34”, which is associated with other medically relevant factors as well as with a poor fledging success rate.

To investigate the impact of a sexually transmitted infection on the individual fitness of female birds, samples were taken and analysed from more than 170 kittiwake males and females. Nests and the fledging success were also monitored. “Infected females achieved the same reproductive success as uninfected females, but they laid their eggs earlier and produced a higher clutch size,” says Wagner. “This suggests that females pursued a costly strategy of compensation that made up for the disadvantage of infection.”

The increased reproductive stress from a pathogenic sexually transmitted bacteria should produce selective pressures for the evolution of defensive measures by females. The co-evolutionary dynamics between STIs and their hosts, moreover, are likely to have led to hitherto unexplored adaptations involving multiple branches of biology such as physiology, morphology and mating behavior, as well as veterinary medicine, which links the topic to human medicine. “Sexually transmitted diseases in wild animal populations deserve to grow into a new field. We hope our study, which demonstrates the feasibility of researching STIs in nature, will stimulate further research”, says Wagner.

Link to the English press release, the scientific article and the free press photos