Pneumocystis spp. are a group of highly diversified opportunistic fungi which are adapted to the lungs of a large variety of mammals. High numbers of Pneumocystis carriers have been described in rats and humans, but also in preliminary studies of pigs prevalences between 51% in pigs with pneumonia and 73% in pigs without respiratory disorders were observed. In humans, Pneumocystis colonization has several potentially important clinical effects as development of acute pneumonia, transmission to other hosts, or involvement in the progression of certain lung diseases as cofactor.

As different age classes of pigs may be kept together in a single facility and thus share the same microbiological environment, these animals are predisposed to polymicrobially caused diseases and in modern pig production systems respiratory disorders pose one of the main health problems. Preliminary data have shown that Pneumocystis can essentially contribute to polymicrobially caused respiratory diseases and in case of infections especially of young pigs the economic impact can be quite high, because developmental deficits early in life can hardly be compensated for.

Currently, the genomic landscape of Pneumocystis carinii f. sp. suis (referred as Pneumocystis suis in this proposal) is almost completely unknown. Whole genome sequencing of Pneumocystis suis will reveal its genome content and structure, and metabolic and other biological pathways, and provide insights into its unique characteristics compared to other Pneumocystis species. This work will contribute to a better understanding of the disease process and pathogenesis of Pneumocystis pneumonia in pigs, and potentially guide the development of new strategies for diagnosis, treatment and prevention.

Using animal models (pig and rat) the effects of mild hypothermia on neuropathological changes after cardiac arrest and reperfusion are investigated. The optimal time point and the best method for induction of hypothermia should be determined.

There is increasing evidence that avian haemosporidian parasites (genera of Plasmodium, Haemoproteus and Leucocytozoon) are not only benign commensals but are frequently responsible for lethal infections in birds. Pathogenicity is predominantly inferred by tissue stages of these parasites, which develop in different cell types and lead to blockage of blood vessels and tissue damage. Currently, there is only fragmented knowledge on long-term persistence of these infections and the existence of dormant parasite stages, on the cell types which are targets of replicative tissue stages, on the effect of mixed infections on tissue damage, and finally the question whether 18S ribosomal RNA is differentially expressed in certain developmental stages of the avian malaria parasites.

First, differentially expressed 18 rRNA variants will be labelled by variant-specific probes in avian hosts and arthropod vectors. These results form the basis for the consecutive project parts. The search for dormant stages will be pursued by a highly sensitive in situ hybridization procedure in experimentally infected canaries. The host cell types supporting propagation of parasites in different tissues will be identified by double labelling approaches with antibodies for certain cell markers and molecular probes for haemosporidian meronts. In addition, the effect of mixed infections with two or more haemosporidian species will be tested by double staining procedures.

The majority of the proposed research questions have not been addressed previously (dormant stages and differential expression of rRNAs in avian malaria) or were not explored in a comparably convincing manner, like the identification of cell types allowing propagation of avian malaria parasites, or the effects of mixed infections on the severity of tissue damage.

Tissue specimens have been traditionally examined by pathologists using conventional light microscopy. Digital pathology is an emerging field of pathology that uses digital microscopic images and is increasingly replacing traditional light microscopy. Whole slide image (WSI) scanners enable digitization of entire microscopic specimens, which can subsequently be examined by observers (digital microscopy) or be analyzed by computer software (automated image analysis). With this new technology, there are numerous innovative applications for histopathological diagnostic, research and educational purposes. Regarding diagnostics of surgical tissue biopsies, general advantages of digital pathology include improved work flexibility (such as home office), optimized laboratory workflow and increasing accuracy and reproducibility in quantifying histopathological parameters. The latter can be archived by automated image analysis, especially if artificial intelligence is used. Although many diagnostic laboratories are already using digital microscopy, automated image analysis is not routinely applied due to limited availability of software solutions and insufficient knowledge of performance and reliability.

The goals of this research project are to develop innovative software solutions using artificial intelligence for tumor histopathology and validate its diagnostic applicability. This project is conducted in cooperation with research partners from the Technische Hochschule Ingolstadt (workgroup of Prof. Dr. Marc Aubreville), Friedrich-Alexander Universität Erlangen-Nürnberg (workgroup of Prof. Dr. Katharina Breininger), Freie Universität Berlin (workgroup of Prof. Dr. Robert Klopfleisch) and Animal Medical Center, New York (Dr. Taryn A. Donovan). The focus of this project is to optimize current algorithmic solutions in order to allow a broad application in different laboratories, validate different approaches for application of algorithms in a diagnostic setting, evaluate the influence of algorithms on quality and efficiency of diagnosis and prognosis as well as scrutinize advantages and disadvantages / limitations of automated image analysis. 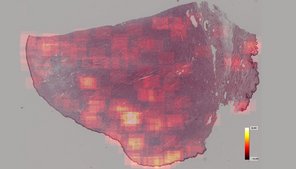 Heat map of mitotic distribution in a histological section of a canine mast cell tumor as an assistive tool for pathologists to find the tumor area with the highest mitotic density.