27.01.2022: Austrian Researchers show how cockatoos invent the use of complex combined tools in a test inspired by the game of golf.

Associative tool use has been greatly important in human technological evolution. It means that more than one object are used in order to achieve a common purpose. Expectantly, it is extremely rare in animals especially in two of its most advanced forms, composite and compound tool use.

Famously our ancestors invented their first compound tools by joining two objects firmly joined together to give rise to a new object, two early examples of this might be axes, or pointed spears.

Cognates or even possibly predecessors of such compound tools are composite tools. These tools are not assembled in a fixed manner, but instead their functions are combined. In their most efficient forms, composite tools require some form of stability between the two tools, this has given rise to the bow, the sling, or the spear-thrower. In contrast, composite tools that allow both tools to be free-moving (which are arguably more difficult to aim with) have given rise to new kinds of recreational activities. Sports such as field hockey, cricket, or golf are perfect examples of this.

Antonio Osuna-Mascaró from the Messerli Research Institute at the University of Veterinary Medicine in Vienna investigates the innovative problem-solving abilities of a particularly tool adept bird, the Goffin's cockatoo. These small parrots learn to use tools like us, through exploration and play, or perhaps with even more merit, because they can invent them but don’t need them in the wild. Despite this, they have proven to be at primate level at using tools, solving all kinds of tests with them.

Osuna-Mascaro describes how the idea for the study came to him on his way to the Goffin Lab, which is located in the countryside of Lower Austria: "I wanted to design an experiment to test to what extent these amazing creatures pay attention to simultaneous actions during their tool use," says Osuna-Mascaró. "I couldn't just mimic the techniques employed by other tool users such as chimpanzees when cracking nuts with stones because cockatoos do not have hands; I thus had to rely on a tasks that allows for movements that are more natural to these animals. I found that the answer had always been on my way to the lab, a golf course! A golf-like challenge might allow me to test the animal’s ability to conduct composite tool actions".

Cockatoos at the golf course

The new task consisted of a platform with a green carpet encased inside a box with a frontal grid. On each side of this ‘green’ was a rectangular ‘hole’ with a collapsible platform underneath. During testing one of these two collapsible platforms was visibly baited with a cashew nut. The frontal grid of the box had a central hole that allowed for the insertion of a heavy white marble onto the centre of the 'green’. The marble would however not fit through the rest of the grid. Nevertheless, a stick could be inserted and directed in a way that it would push the marble into one of the holes on top of the collapsible platforms, releasing the food reward provided the correct hole was hit.

Tool innovation at the highest level

"Three of our cockatoos figured out how to use the stick to shinny the ball into the correct hole and secure a reward, a real demonstration of tool innovation at a very high level," comments Osuna Mascaro. "One of the most amazing aspect of the process was to observe how these animals each invented their own individual technique in how to grip the stick and hit the ball, sometimes with astonishing dexterity. One of the birds operated the stick while holding it between the mandibles, one between the beak tip and tongue and one with his claw, similar to a primate".

Alice Auersperg, another author and head of the Goffin Lab at the Messerli Research Institute, comments: "I believe that studying which spatial relationships animals are attending to and how they are using them for enabling tool innovations will be key to getting us better insight into the evolution of technology. Enhancing our understanding of the onset of complex tool use in particular is thus currently a focus of our research team” 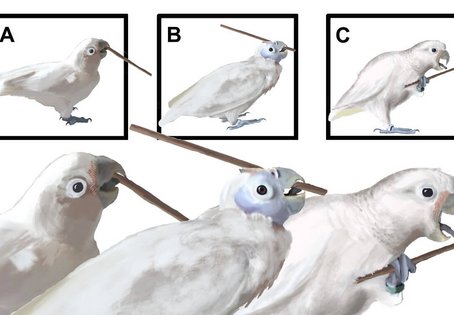 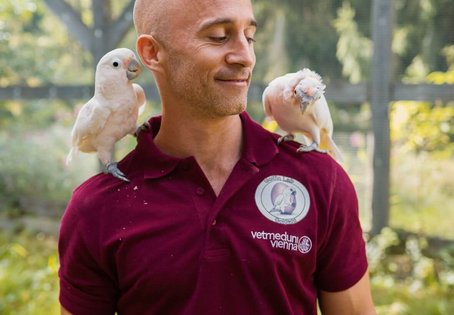 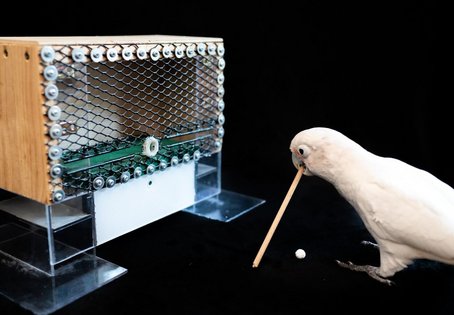 Tool use with primates requires years of experience

Two kinds of primates, chimpanzees and capuchin monkey are known to be using composite tools by coordinating a stone used as a hammer against a nut resting on another stone serving as an anvil. Although the use of composite tools in chimpanzees requires years of experience and practice, some cockatoos seem to acquire the task surprisingly fast. Figaro, the adult male cockatoo which outperformed most of his conspecifics in this experiment, was able to solve the test from his first attempt. He only failed on one occasion, by cheating the box, finding an error in the mechanism that allowed him to solve it without the use of tools. Hole in one for Figaro!

All birds’ technique only

The article „Innovative composite tool use by Goffin’s cockatoos (Cacatua goffiniana)“ by Osuna Mascaró, A. J., Mundry, R., Tebbich S., Beck, S. R. and Auersperg, A. M. I. was published in Scientific Reports.

To the scientific article