Tadpoles and poor visibility – an exciting model for understanding evolution

22.03.2022: In an article published in Frontiers in Ecology and Evolution, an international team of researchers led by Vetmeduni investigated how tadpoles respond to limited vision in their habitat. According to the researchers, amphibians offer an exciting opportunity to better understand adaptations to visually-limited environments and provide new experimental considerations and interpretations for future research.

The tadpoles of some tropical frog species inhabit relatively shallow freshwater environments. Within the confines of these micro-aquatic settings, there is considerable diversity in the structure of the habitats. This habitat structure is usually considered in relation to aspects such as locomotion and feeding and plays a fundamental role in the classification of tadpoles into ecomorphological guilds. Its impact on shaping the sensory worlds of species has rarely been studied, however, including the optical qualities of different types of water bodies and the challenges and limitations they present.

Research field with many unanswered questions

In an article of previous research, an international team of scientists led by last author Bibiana Rojas from Vetmeduni´s Konrad Lorenz Institute of Ethology examined the current state of research on tadpoles and their response to environments with limited visibility. They found that there is currently little evidence-based knowledge in this field, especially regarding the role of turbid and light-limited environments in shaping the amphibian larval visual system and the possible behavioural and phenotypic responses of larvae to such environments.

As a medium, water poses unique challenges and opportunities compared to air, which has resulted in distinct physiological adaptations even in temporarily aquatic animals such as tadpoles. For example, short-range communication using chemical signals is facilitated in water, whereas communication using sound in shallow water environments is compromised. The visual world under water is shaped by the way in which light is refracted and attenuated and by the inherent optical properties of water – for example, the high absorption of blue light – as well as by the turbidity of the water due to environmental influences. 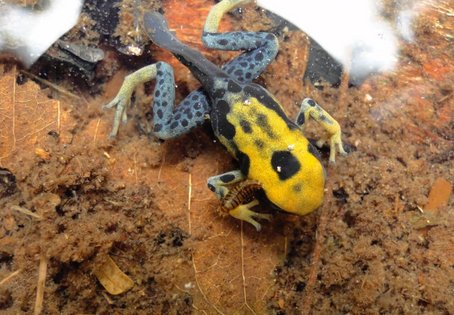 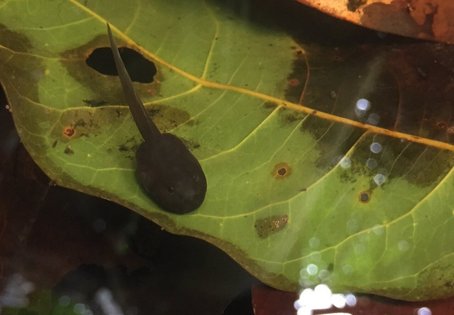 Rojas emphasises that phenotypic plasticity – the interaction of environment and genetics – is a research area of particular interest: “Tadpoles constitute a unique model to understand the evolution of vertebrate visual systems in the transition from aquatic to aerial environments and the effects of ontogeny, i.e. the individual development of animals, on the maintenance or change of ocular adaptation. Thus, the visual aspect of ecosystems and the behavioural adaptations resulting from environmental changes provide an exciting and relatively unexplored framework of questions to explore and answer.”

Exploring how colours change in the face of increased turbidity, for example, would be an opportunity to understand the plasticity of colour-based signals and how these are shaped by optically challenging scenarios. Overall, according to Rojas, tadpoles provide an exciting opportunity for exploring adaptations to visually limited environments. “The comparative study of these evolutionary adaptive responses across natural evolutionary groups (clades), habitats and geography will surely challenge evolutionary ecologists for years to come,” says Chloe Fouilloux, first author and PhD student in Rojas’ group.

The article “Tadpole Responses to Environments with Limited Visibility: What We (Don’t) Know and Perspectives for a Sharper Future” by Chloe A. Fouilloux, Carola A. M. Yovanovich and Bibiana Rojas was published inFrontiers in Ecology and Evolution.

To the scientific paper